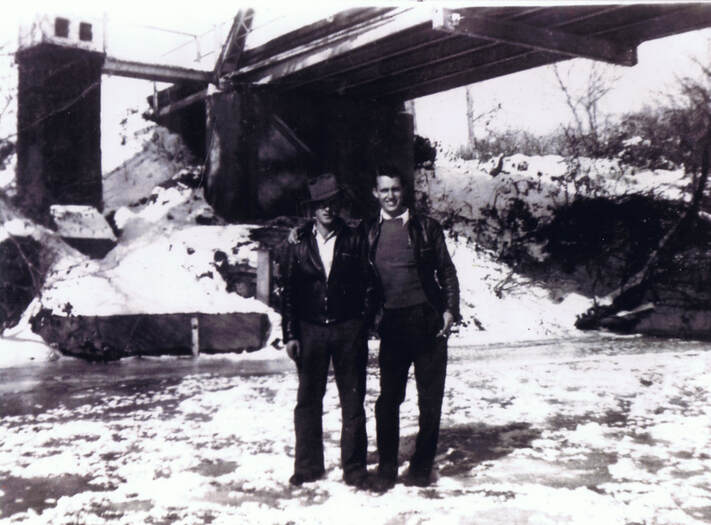 1930s - Standing on the frozen French Broad River at the Blantyre Gauge.
L to R, Winborn Gash and Claude Davis of Blantyre. 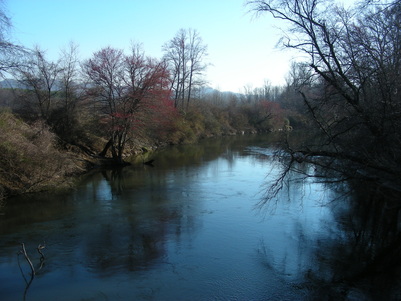 "South out of the green heights of Pisgah National Forest the North Fork of the French Broad tumbles past Piney Mountain and Spice Cove and Panther Mountain to join the West Fork of the river.  For a unique feature of the French Broad is that it begins with four  large tributaries flowing from the four cardinal points of the compass and all called by the river's final name.  From the little township of Rosman where the four join to create the main stem of the French Broad, it follows a sinuous northerly course through narrow but fertile bottom lands and receives two more rivers, the Davidson and the Little, before it enters Henderson County, twice the population of its neighbor Transylvania, where the bottom lands become wider and Mills River quietly joins its course and Mud and Cane Creeks enter from the east.  Just south of Asheville the plain Hominy and the poetic Swannanoa become part of the French Broad."  (pg 8)
Go to page:  "Mountain Lily" steamboat
on the French Broad River